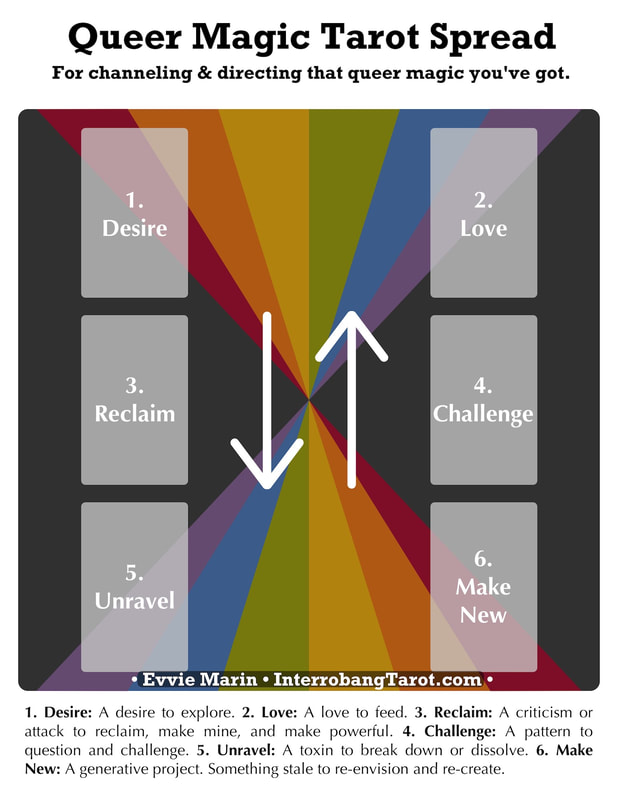 For channeling & directing that queer magic you’ve got.
1. Desire: A desire to explore.
2. Love: A love to feed.
3. Reclaim: A criticism or attack to reclaim, make mine, and make powerful.
4. Challenge: A pattern to question or challenge.
5. Unravel: A toxin to break down or dissolve.
6. Make New: A generative project. Something stale to re-envision and recreate.


Queer Magic, alright! To dig deep with this spread, we first have to reckon with our definitions. What even is magic? What even is queering? And how do they fit together?


(Big note right up front: there’s a huge difference between exploring and claiming magic for yourself, and having it stereotypically thrown at you like a tired TV trope. We’re about to talk a lot about magic, but this is not about the magic of channeling your inner sassy fairy-godmother for the benefit of some cis-het Cinderella.)


Magic first. OK. This word has A LOT of potential definitions, and if you’re into the M- word, it’s useful to journal out what you reckon it contains, yourself. I’ll cover a handful of themes here. You don’t need to believe in or practice magic to use the word symbolically and get something rich out of this spread. I’m writing from the perspective of an artist and folklore nerd, myself. Treat it like a story and follow along at your comfort level.


In the internet district of Occultsville, the most common definitions of magic you’ll encounter are a handful of Crowley derivatives that all go something like “change in accordance with will.” That’s a fine start, but it’s open enough to cover all intended change, and that’s a bit too broad for my taste. I prefer to narrow the field with some (admittedly still broad) qualifiers:


Magic -n.- 1. The practice of causing or influencing desired change, or obtaining a desired result, through uncanny and indirect methods drawing on any combination of mental, emotional, ritual, spiritual, or symbolic activities, petitions, or crafts.


We can’t ignore the artistic and pop-culture sides of the word, either. In workaday speech, magic crops up most frequently as a catch-all for weird, wondrous, and awe-inspiring things we don’t fully understand. Art, technology, natural phenomena, and illusions that wow us all feel magical when we don’t get to see their back-end processes and causal chains. That wow-response generates strong feelings. Then there’s the magic of sci-fi and fantasy—an imagined creative force that makes all zany, natural and human law-breaking things possible.


When we use magic in these contexts, we almost always understand that magic in any occult or religious sense is not actually in play. However, we simultaneously understand that its specter moves us in powerful ways, as in the magic of childhood, of holidays, of theatre, of fiction, of ground-braking technology, and so on.


Magicians and spiritual kids do well not to overlook these latter, secular and folkloric definitions of magic. They have artistic, creative, and occult significance. Not least is the fine chance that what we categorize as occult magic and paranormal phenomena are themselves illusions produced by natural happenings we don’t understand yet—back-end processes and causal chains we’re not privy to from this vantage point.


The common thread shared by each of magic’s definitions is this: when stuff happens and we don’t know quite how. Magic is the action of mystery.


The above definitions represent magic’s primary traits, but it comes with a host of secondary markers, too. To lean on a spoonie analogy, we might diagnose magic based on the criteria I’ve just covered, but we can also trace a range of secondary-markers and comorbidities that tend to crop up in many, but not all of its manifestations for reasons as yet unknown. Oddly enough, these secondary markers of magic bear an uncanny resemblance to primary markers of queerness and queering, so we’ll cover both together.


Liminality & Marginality: Magic gravitates toward liminal, edge-centric spaces, times, and states like crossroads, borders between ecosystems, banks and shorelines, and the moments between dreaming and waking. Queer people are marginalized by society, but thrive in underground subcultures. Many of us blend or hold space between genders or gendered roles, which is a liminal state in its own right.


Multiplicity & Shapeshifting: Magical beings and creatures have a reputation for shape- shifting and complexity, holding multiple bodies and conflicting qualities either simultaneously or in succession. Many magical critters change form on a dime by necessity or whim. Others undergo singular but profound metamorphoses. The broad queer community has a like penchant for shapeshifting. Many of us like to alternate between a range of presentations. As a cohort, we’re better in touch than the general population with our inner Masculine, Feminine, Both, and Neither, and this gives us an innate multiplicity that some find unsettling, if they can wrap their heads around it at all.


Artistry, Creativity, & Glamor: Art, creativity, illusion, and artifice are cornerstones of magical workings. There’s a reason they call it the Craft. Meanwhile, it’s hard to find a queer kid who isn’t some kind of artist, author, crafter or maker. Every single arts and entertainment industry owes its life blood to queer and POC makers. Theatre, burlesque, masquerading, fashion, and glamor are queer as a Rococo unicorn rollerskating down a catwalk, and involve no small degree of ritual to pull off right.


Playfulness & Trickery: Magic either attracts or generates tricksters, I’m not sure which. Maybe a bit of both. The Trickster archetype is as playful as hazardous. Mischief is the meeting point between danger and play, and nothing could be feyer. Life on the margins of society seems to do something similar to living, human critters. The Queer archetype has a tricksy, playful aura, perhaps born from defiance under persecution, and the resilience of artistry and bliss in the face of threatened survival.


Daring & Courage: Practicing magic and living openly while queer are both quite dangerous, and so require daring, tenacity, and grit.


Mystery & Secrecy: Magic and queer life have both been persecuted for millennia, and have both persisted through subtlety, discretion, hushed meetings, and secret codes.


Subversion, Rebellion, & Lawlessness: If magic works, it’s a tremendous threat to the powers that be because it subverts and rebels against authority by placing power back in the hands of those who’d otherwise have none. As a neutral force, both creative and destructive, it has an anarchic and amoral nature. No surprise that common folk magical practices have been criminalized historically.


Queer bodies, desires, and values pose a similar threat to anyone in power whose primary goals include population control, outbreeding their enemies, enforcing narrow social scripts around sexuality and family structures, and consolidating and maintaining the primacy of one gender and/or race above all others. These motivations aren’t antiquated quirks. American Evangelicals and Christo-fascists preach the imperative to “breed an army for God” today. (Their language, not mine. Yes, this is really a thing—a big thing in some regions.)


In the US alone, one of the more tolerant countries today, entrapment and arrest of LGBT folx didn’t even think about slowing down until the 1970s. The US supreme court struck down same-sex sodomy laws in several states through Lawrence V. Texas in 2003. Trans women get arrested on false prostitution charges today. Even in tolerant countries, five of six living generations of queer human beings were criminalized in some way at our time of birth. World over, that’s 6/6. Chew on that for a spell.


Power: Magic is a power, so it follows that magical practice is an exercise of taking and directing power. So is queering, and so is Pride. When we show up queer without apology, we take power back from the people who made us grow up without language for ourselves, and without equal representation, community, and rights. When we change what gender and gender roles mean within ourselves, through queer sexuality or gender, we change what they can possibly mean in the world. That’s some fucking magic, or I don’t know what is.


That’s the magic this spread is all about. It’s for showing up queer and making the kind of change, through your queerness, that feeds spirit, first for yourself, then for your beloveds, and lastly for the ripple effects it’ll throw into the hive mind.


In card 1, explore a desire. You have to pull your will into focus before you can pull it into being. In card 2, name a love to feed. Queer love is beautiful, and beauty comforts, charms, and beguiles. In card 3, consider a criticism or attack to reclaim. Reclamation is alchemy. In card 4, name a pattern to question or challenge. Challenging and questioning the powers that be is gold. If your magic isn’t disrupting the cruel designs of wickeddy royals and landlords, what is it even doing? In card 5, find a toxin to break down or dissolve though your queering. Magic digests, undoes, and crosses over as much as it brings forth. Sometimes the old has to step aside and decompose to make way for the new. And finally, in card 6, pick a generative project. Re-envision and recreate through your queer arts and Crafts.


2. Queering Your Magic: You might also use this spread to creatively merge your magical practice and your queer experience. That iteration goes like this:


3. Talents: In tarot, The Magician is steward of talents, charism, and showmanship. Use this spread as a prompt to explore your unique talents within the spheres of desire, love, reclamation/alchemy, resistance, loving destruction, and creation.


4. Mini Manifestations: The six cards in this spread are grouped by themes of love (desire/ love), rebellion (reclaim/challenge), and creation/destruction (unravel/make new). Draw a mini two-card spread of any given row to explore how you can navigate and manifest desired outcomes within those themes.


Looking for love or romance? (This works for platonic, romantic, or sexual connection.)
1. Desire: What do I need to know about the state of my desires?
2. Love: How can I attract more love?


Working through a tough challenge or looking to boost your activism?
3. Reclaim: A criticism or attack to reclaim, make mine, and make powerful.
4. Challenge: A pattern to question or challenge.
​

Stuck on a creative project?
5. Unravel: Something to scrap or edit.
6. Make New: Something spruce up, add, or re-iterate.